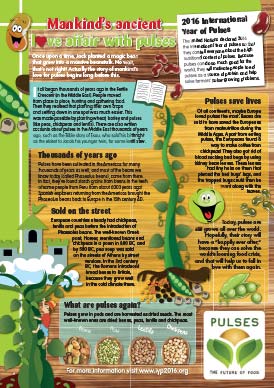 Once upon a time, Jack planted a magic bean that grew into a massive beanstalk. No wait, that’s not right! Actually the story of mankind’s love for pulses begins long before this.

It all began thousands of years ago in the Fertile Crescent (in the Middle East). People moved from place to place, hunting and gathering food. Then they realised that planting their own crops and settling down in one spot was much easier. This was made possible by planting wheat, barley and pulses (like peas, chickpeas and lentils). There are also written accounts about pulses in the Middle East thousands of years ago, such as the Bible story of Esau, who sold his birthright as the eldest to Jacob his younger twin, for some lentil stew.